We were spending the weekend in Jardin (please see that post). One of the sights not to be missed in Jardin is the Gallito de Roca Preserve. And what is the Gallito de Roca?  The Gallito de Roca is a bird, the Andean Cock-of-the-Rock (thus named because they use rocks to make their nests). It is a large bird, and is in the passerine family (meaning that it is distinguished by feet that are adapted for perching). They grow to be about a foot long, weighing almost a pound. It is the national bird of Peru and is almost unique to the Andes, but here we were in Columbia, in Jardin to be exact, and we would get to see them.

So, in the afternoon, we began our hike to find them. We walked to the end of the street where there was a bright yellow bridge, the Serranias bridge, also called the Bridge that Shortens Distances in Jardin. The community of Serranias had to travel over an hour to get to town until this bright yellow bridge was built.

The path to the lek was right before the bridge, but I had to cross it and look at the view. There was a young French couple there and I took their picture for them. I told them about the birds and they followed us down. 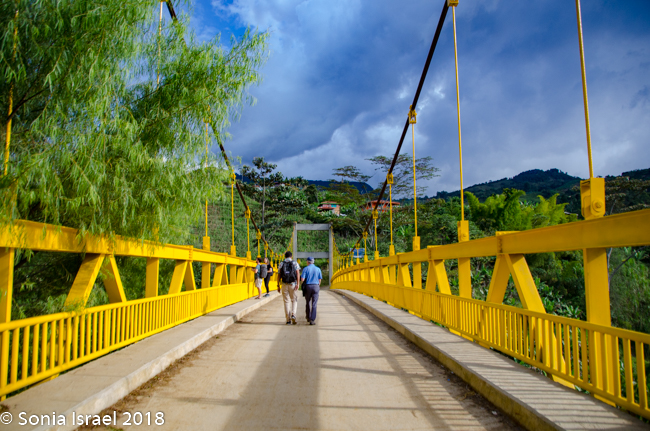 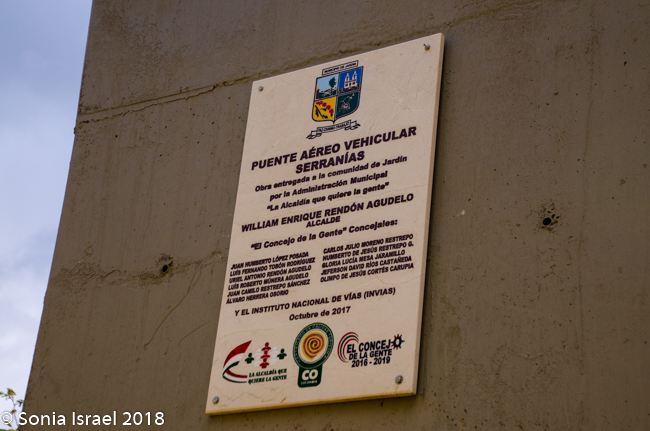 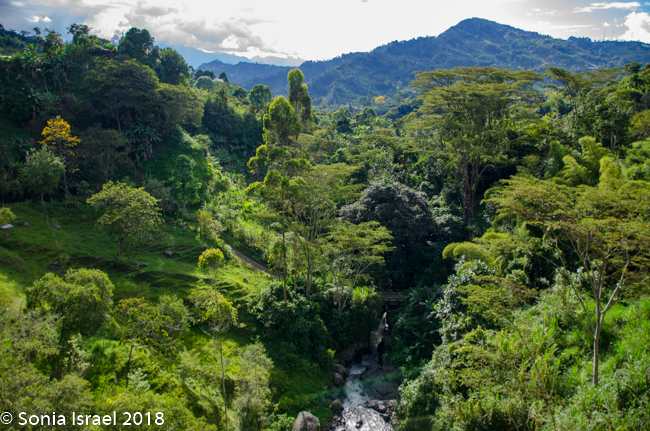 Wait.  What is a lek? A lek is a communal courtship site, or in other words, a communal area where two or more males perform courtship displays. The Gallito de Roca live in this lek and it is one of the only places one can see them. They fly in at dawn and at dusk so that is when you have to try to see them. So that was where we were headed.

We hiked down the mountain, first on a semi-paved road, then on a dirt road, then back to a semi-paved road. At the bottom was a bamboo gate which was locked. This was the Gallito de Roca Preserve. We thought it was open from 4-6 in the evening and got there at 430. The sign however said it would open at 5:00. We were getting ready to find a rock to sit on and wait, as we were not going to climb back up the hill and then back down again.  But Olga came over and unlocked the gate for us.  She and her husband, a researcher of the birds, live here and the open the Preserve for visitors every morning and every evening. After paying the entrance fee (which was only about $2.00 for locals and $3.00 for visitors), she led us down some stone steps to the edge of the forest. 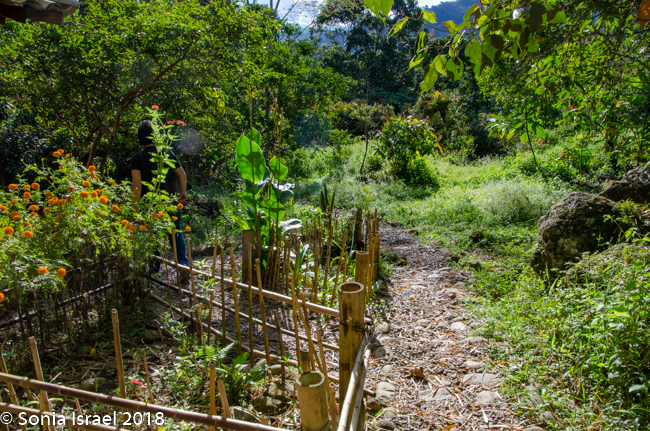 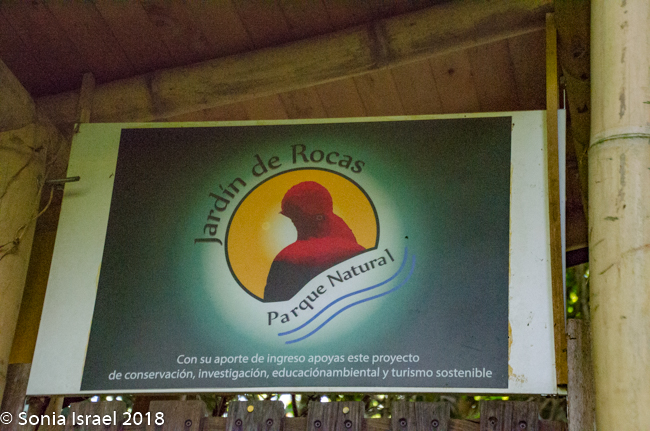 And there they were.  They were magnificent and like nothing I had ever seen before. The upper half of their body was an orange-red, the wings black and there was a gray patch on their backs. But it is their heads that were so fascinating. They look like a rooster (and that is their nicknames), with a big, disc-like crest on top of their heads.  And a yellow beak. And they were big.  They were jumping up and down on the branches, displaying for the females (who we did not see). And they were making low, guttural croaks sounding like “tank, tank, tank.”

Note: you may think I have too many pictures of them, but click on each one as they really are different. 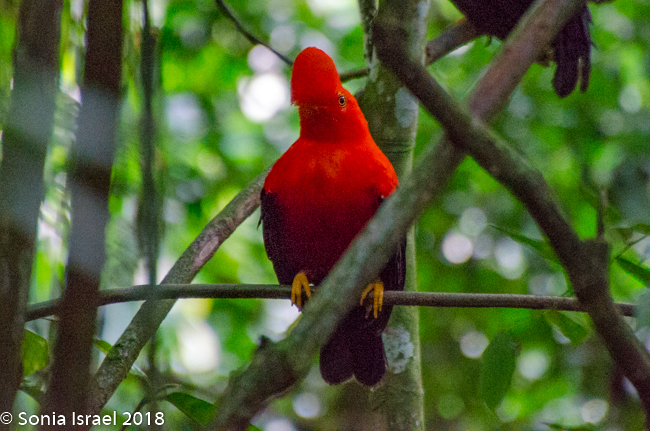 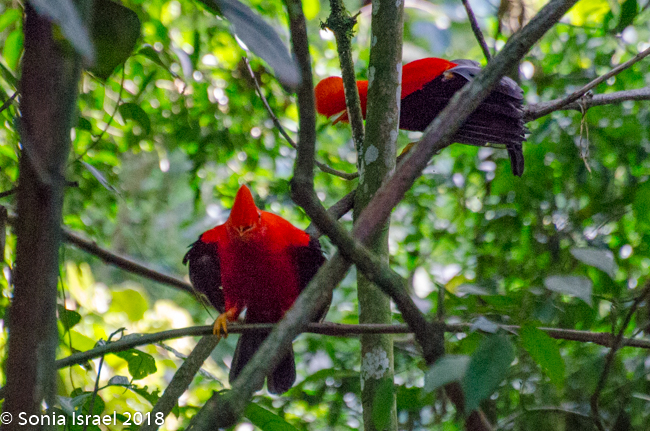 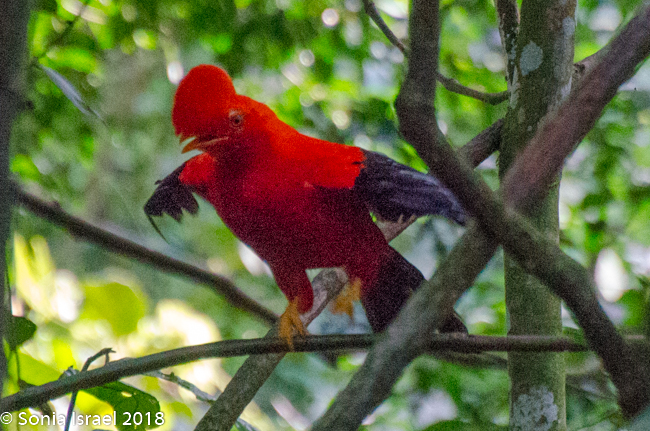 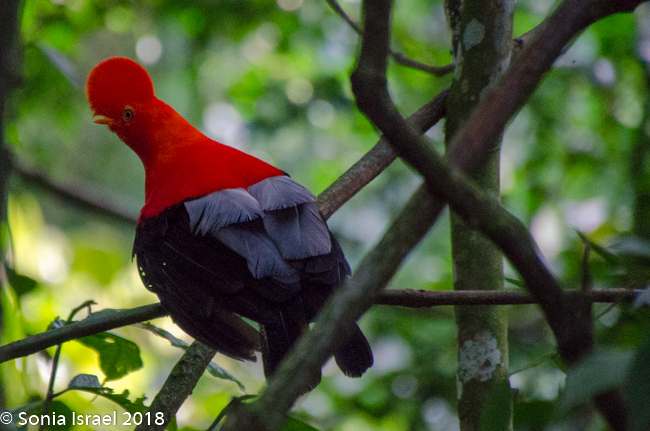 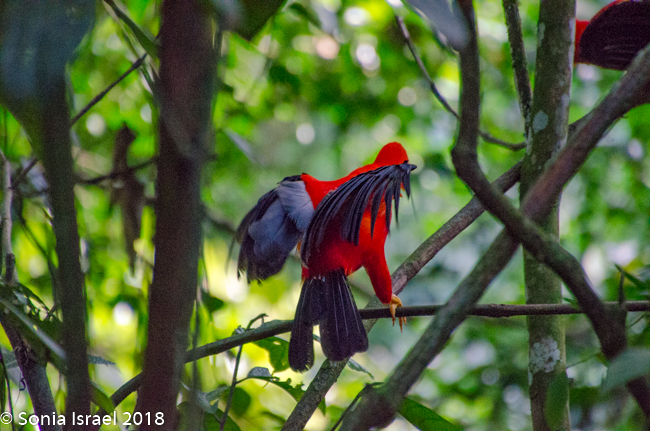 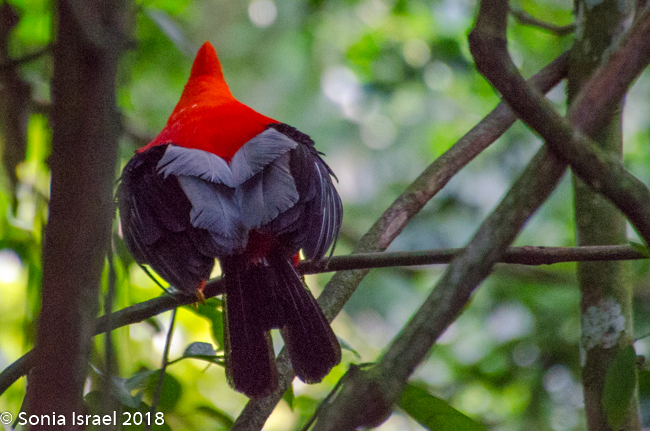 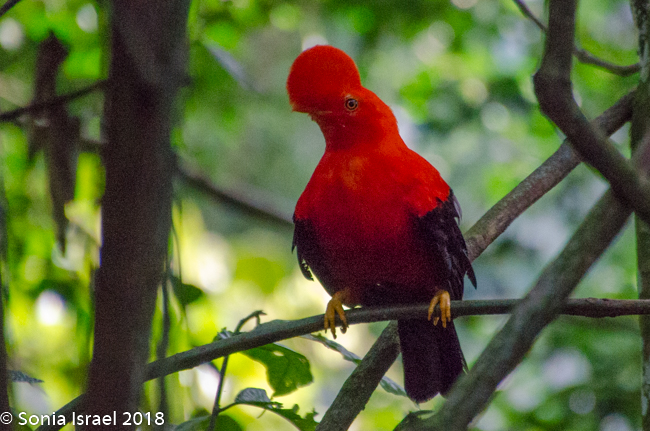 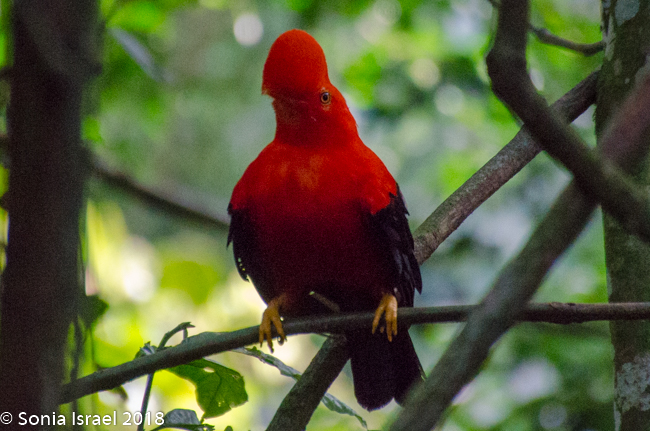 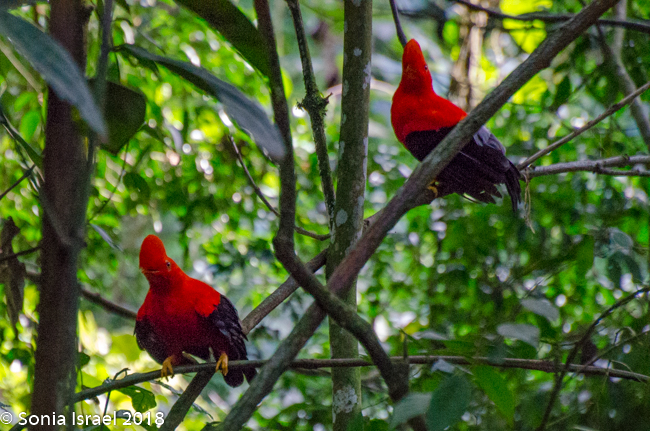 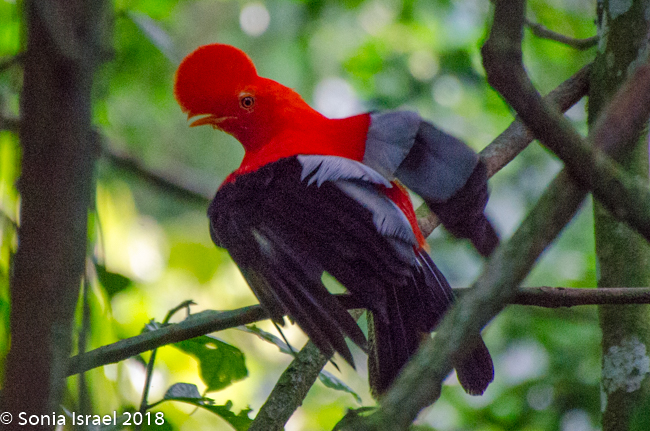 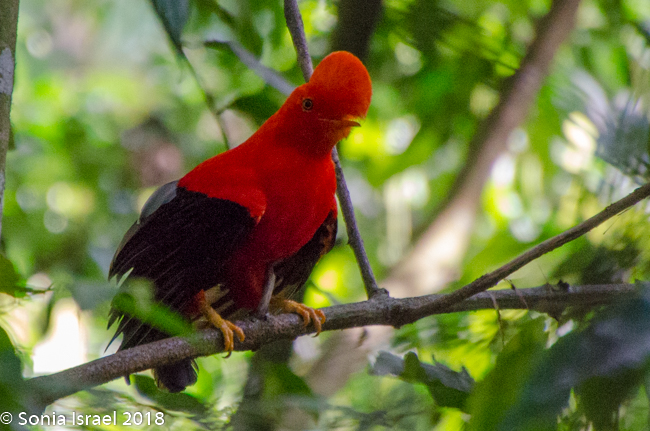 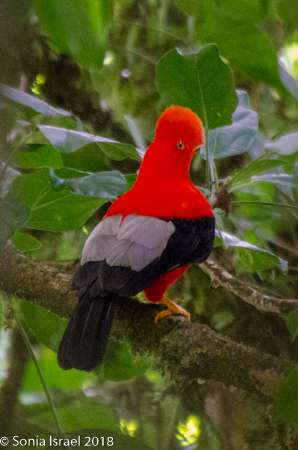 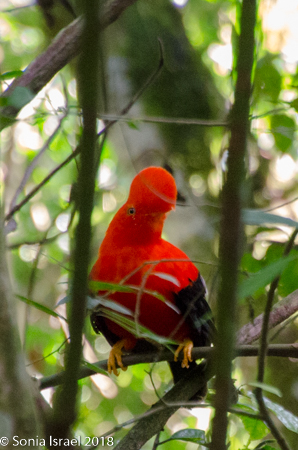 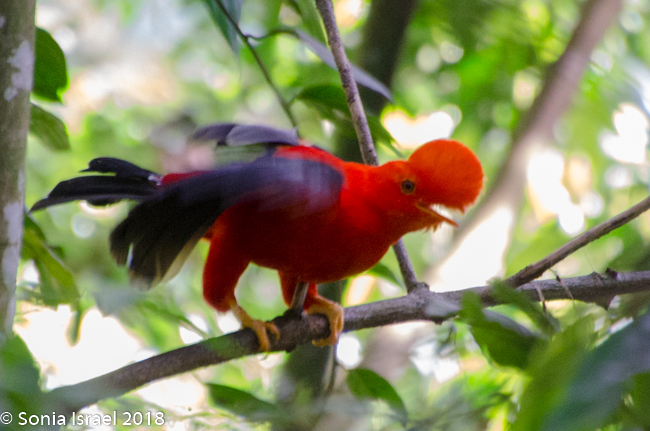 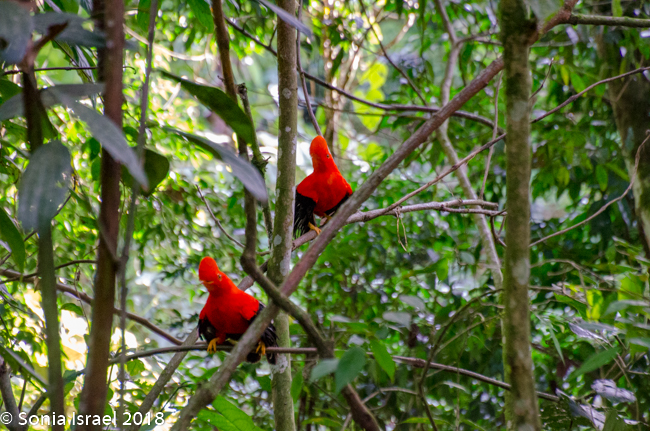 We stood there for quite a while just watching and listening. We followed them as they hopped from tree to tree and branch to branch. They longer we stood there, the more birds appeared. It was dusk and their time to show off for the females.  But we felt like they were showing off for us.