Salisbury Plain lies on the north coast of South Georgia. We started out here, when we first arrived, looking out at the field of penguins from the deck of the ship, and now we return for our last zodiac landing on South Georgia. The great American ornithologist, Robert Cushman Murphy, did much of his research here in 1912-1913 and named one of the many glaciers here after his wife, Grace. The other glacier we can see from our windows is the Lucas Glacier.

The hills are covered in tussock grass which houses one of the largest King penguin colonies in South Georgia, with 70,000-100,000 pairs. PAIRS!

We woke up early, eagerly lifted our blinds and looked out our window. The scene was one of white on white with a few black dots. It had snowed here since we stood here a week ago. After yesterday’s high winds, we were not sure what we would find here, and whether we would be able to go ashore. But while the temperature was low, the wind howling, it was only about 12 degrees F with the wind chill factor.  Doable, as long as we again put on every piece of clothing we had brought along!

I put on my jacket and went to the top deck to take it all in. The sky was blue, the sun was coming out and began reflecting on the glaciers. The plain was covered in snow and the penguins were huddled in groups at the shoreline, reflecting in the calm water. There were a few elephant seals bellowing, but not as many as on other beaches in other parts of South Georgia.

END_OF_DOCUMENT_TOKEN_TO_BE_REPLACED

This morning’s wake up call was at 445am. We got up quickly, put on layer after layer of clothes, grabbed our life jackets and headed out to watch the sun rise over Gold Harbor. Gold Harbor, called this because the sun’s rays make the cliffs yellow with their light in the morning and in the evening. And that’s why we got up early, to reach the beach as the sun was rising and the light was golden.

END_OF_DOCUMENT_TOKEN_TO_BE_REPLACED

We got our wake up call, which is Doug coming on over the intercom saying, “Good morning, good morning…” at 7:00am. Turns out we made great time crossing the Scotia Sea and since we arrived earlier than originally planned, we had the chance to start touring early.

We anchored at Elsehul Bay, described to us as “incredibly picturesque and stunning.” This is an amphitheater of a bay which we would be exploring by zodiac, searching the shoreline for Albatross and other seabirds.

END_OF_DOCUMENT_TOKEN_TO_BE_REPLACED

Days at Sea – The Scotia Sea on the way to South Georgia: Days 5&6

Last night, ropes suddenly appeared all along the halls of the ship. Something to 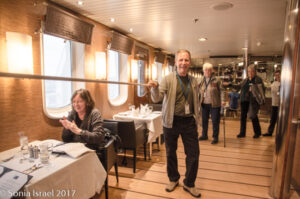 hold on to. The chairs were already tied down, and the silverware was placed inside the napkins. And as we left Stanley and hit the open waters, the ship began “rockin ‘n rollin.” Literally. Rocking. Rolling.