Colombia Part 4: The Jews of Cartagena

As we usually try to do in our travels, we sought out the local synagogue. Cartagena does not have a lot of Jews living here. The estimate is about 50; in fact there are only about 2500 in all of Colombia. There are two synagogues in Cartagena.  One is a Chabad, which is a more recent addition to many, many cities in the world. The other is a more local synagogue, Rabbi Isaac Abravanel Sephardic Israelite Center of Cartagena.

Many of the Jews in Cartagena are are descendants of Jews who were forcibly converted to Catholicism during the inquisition (please see my post on Colombia, Part 1, Cartagena for more on the inquisition), called Marranos or Conversos.

We drove through one neighborhood after another, past beautiful old homes. Our last turn took us along a canal which had a large metal fence and gate at the end. We rang the doorbell and were invited into a large yard full of trees and grass and construction equipment. We were greeted by Rabbi Joaquin Montoya and his daughter Lina, one of four children.

After introductions, Rabbi Montoya told us his story. He was a physician, born in Colombia and raised as a Catholic. He continued, “It was during a comparative religion class at my church that I learned that a lot of the customs we were observing in our home were Jewish customs.” He grew up going to church, but he had other clues. On Friday nights, his mother always lit candles. On Saturdays he was not allowed to go outside to play. He never understood what was so special about Saturdays, but he quickly learned it was a day different from all other days. His family had two sinks in the kitchen, one for meat and one for diary. His grandmother became furious with him once when he put a plate used for meat into the diary sink. When his family bought meat, they soaked it until there was no blood left. Both of his parents had grown up with the same traditions, but neither knew why or what they meant. His wife, interestingly, grew up with the same traditions.

“I started asking my family questions and doing research at the Inquisition Museum in Cartagena. I learned that my family name was among those who were being suspected of being crypto-Jews.” Crypto-Jews is another name for Marranos (which by the way is considered a slur as it means swine). Another name for them was b’nei anusim, meaning those who secretly carried out Jewish traditions throughout the generations, while making believe on the outside to be of a different religion, usually Catholic. After a generation, the descendants usually did not even know that the rituals they practiced were of Jewish origin.

But Montoya now realized he was Jewish. He went to Israel and became a Rabbi.

The synagogue was undergoing construction. Services were being held in the Rabbi’s home, also on the same premises. We could see where the bima (stage) would be in the new synagogue, and the ark to hold the Torah. We could also see the wood and glass mechitzah, i.e, the partition separating the men from the women in the Orthodox way. But we were not there on a Friday or Saturday, so we did not attend services. 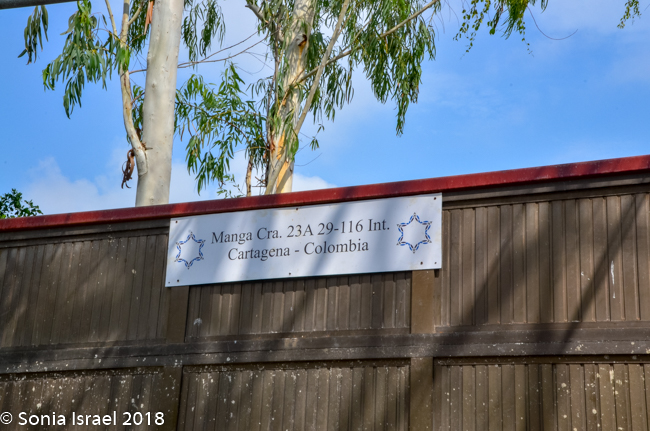 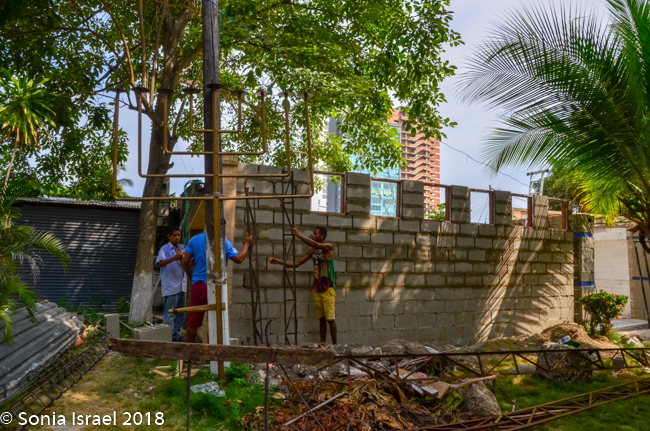 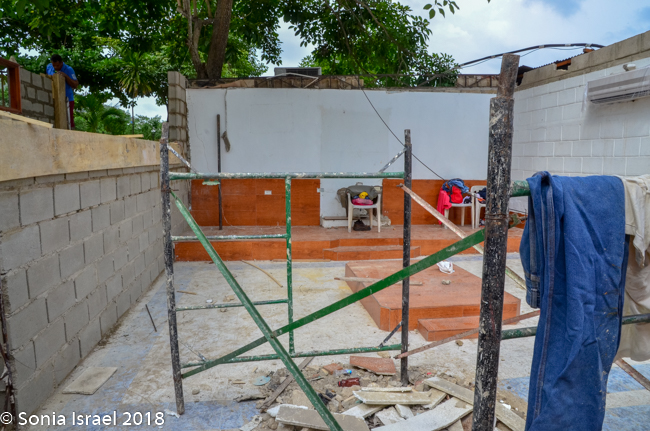 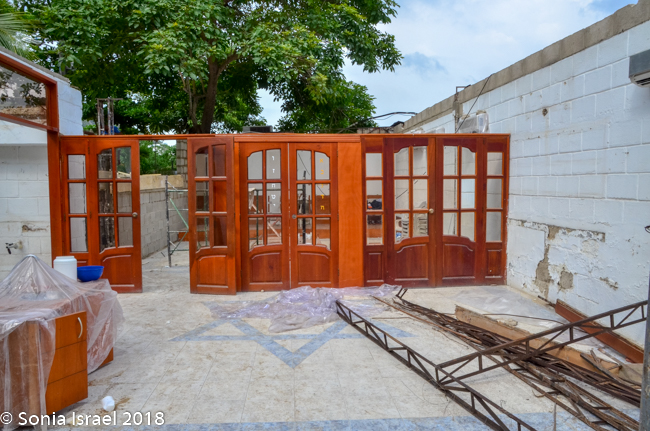 We got onto a discussion about Christopher Columbus. Rabbi Montoya asked if I knew about the belief that Columbus was Jewish. I responded that I had heard a bit 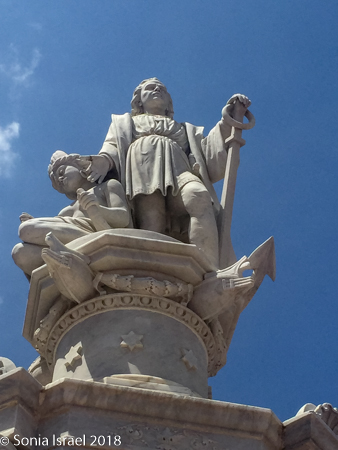 about that. He went on to present what he thought was proof, including the fact that there were Jewish stars on the base of Columbus’ statue in Cartagena,. We had been at the statue that day, but I had not noticed, so I asked Vicky to take us back. And sure enough, the base of the statue was surrounded by Jewish stars.

Columbus signed his last will and testament with five curious, and revealing, provisions. Two of his wishes — tithe one-tenth of his income to the poor and provide an anonymous dowry for poor girls — are part of Jewish customs. He also left money to a Jew who lived at the entrance of the Lisbon Jewish Quarter.

On those documents, Columbus used a triangular signature of dots and letters that resembled inscriptions found on gravestones of Jewish cemeteries in Spain. He ordered his heirs to use that same signature in perpetuity. Historians report that this was a cryptic substitute for the Kaddish, a Jewish mourning prayer. In this way, his sons could “say Kaddish” for their crypto-Jewish father.

Columbus also left money to support his passion in the hope that his successors would take it on.  What was his passion? To liberate Jerusalem (the Holy Land).

Columbus wrote letters back home, while on his journey to the New World, in Castilian Spanish, also called Ladino, which was the Yiddish of Spanish Jewry.  And at the top left-hand corner of all but one of the 13 letters to his son Diego, he wrote the Hebrew letters bet-hei, meaning b’ezrat Hashem (with God’s help) in the top corner. Observant Jews customarily add this blessing to their letters.

Scholars point to the date on which Columbus set sail as further evidence of his true motives and background. He was originally going to sail on August 2, 1492, which happened to be the Jewish holiday of Tisha B’Av which is a fast day which marks the destruction of the First and Second Holy Temples of Jerusalem. Columbus postponed this original sail date by one day to avoid embarking on the holiday, which would have been considered by Jews to be an unlucky day to set sail.  The day he did finally set sail was the last day that Jews could either leave Spain, convert or be killed. Some argue in fact that Columbus’ voyage was motivated by a desire to find a safe haven for the Jews in light of their expulsion from Spain.

There was more. Columbus’ voyage was not, as is commonly believed, funded by Queen Isabella, but rather by two Jewish Conversos and another prominent Jew. As an aside, one of those was Don Isaac Abrabanel, rabbi and Jewish statesman and the man the synagogue in Cartagena is named for.  In fact, the first two letters Columbus sent back from his journey were not to Ferdinand and Isabella, but to the Jewish men, Santangel and Sanchez, thanking them for their support and telling them what he had found.

We chatted some more with Lina and Rabbi Montoya, learning more about his history, took some pictures, exchanged contact info (Sinagoga.cartagena@gmail.com), left a donation, and then said our good-byes. 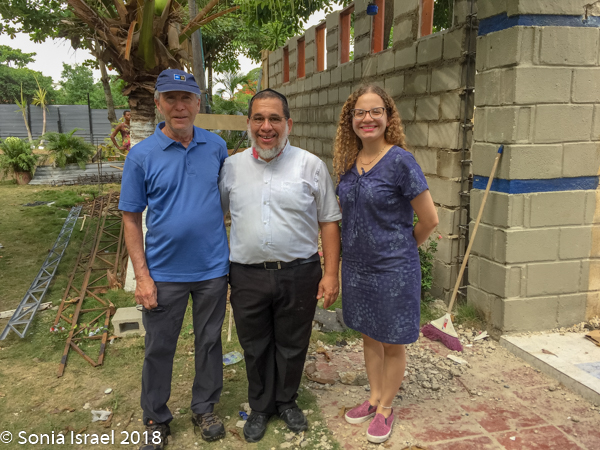 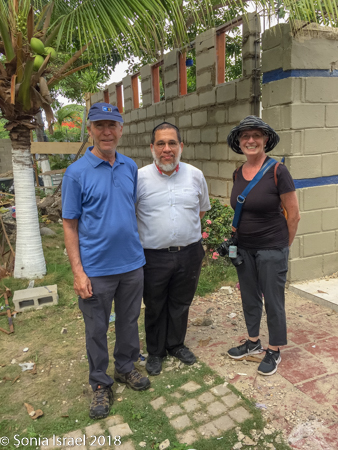